Back in September 2015, Jones Pierce Studios was asked to renovate the leasing center and the clubhouse at the Conservatory at Druid Hills. The new design became a modern rebranding of the existing structure. It contains flat roofs and significantly more and more modern styled windows. The leasing center’s design plays with varying heights and volumes of spaces. This gives a layered effect to the building and maximizing sunlight.

The new design struck the management team as so innovative, that they devised a new name for the entire complex- The Viridian. Just like that, a remodel turned into a rebranding!

JPS worked with the old building footprint, attempting to reuse as much of the existing structure as possible. However, the general layout of the building changes to add more office space, a larger lobby, a cart garage, a wine lounge, and package room. These would all serve as new amenities for residents.

While the leasing center is not large in terms of square footage, the design became quite complex to accommodate the rebranding aesthetic. The flat roof required steel joists to span long distances, and the new large and almost full-height windows restricted the allowable header space. The number of windows allowed for minimal wall support at the central lobby and required beams and metal post structures to bear the weight of a raised roof with clerestory windows. The flat roofs created another issue; allowing only a foot of roof thickness in which to conceal ducts. The engineers had a very difficult job laid out for them and could not approach the building with a standard solution. For this building, the solution would be creative, tailored, and precise.

The existing high pitched roof is completely removed and replaced with a ‘flat’ roof. Additionally, the ceiling heights raise and vary by space. The central area of the building hosts the lobby and offices. It has an open concept while still creating a ‘privacy nook’ for the offices. The ceiling heights transition from 9’-0” (in the offices) to 17’-0” (in the lobby). A line of clerestory windows spans the entire left side of the building, allowing ample sunlight into the offices. The 17’-0” high lobby space is ringed with clerestories as well. 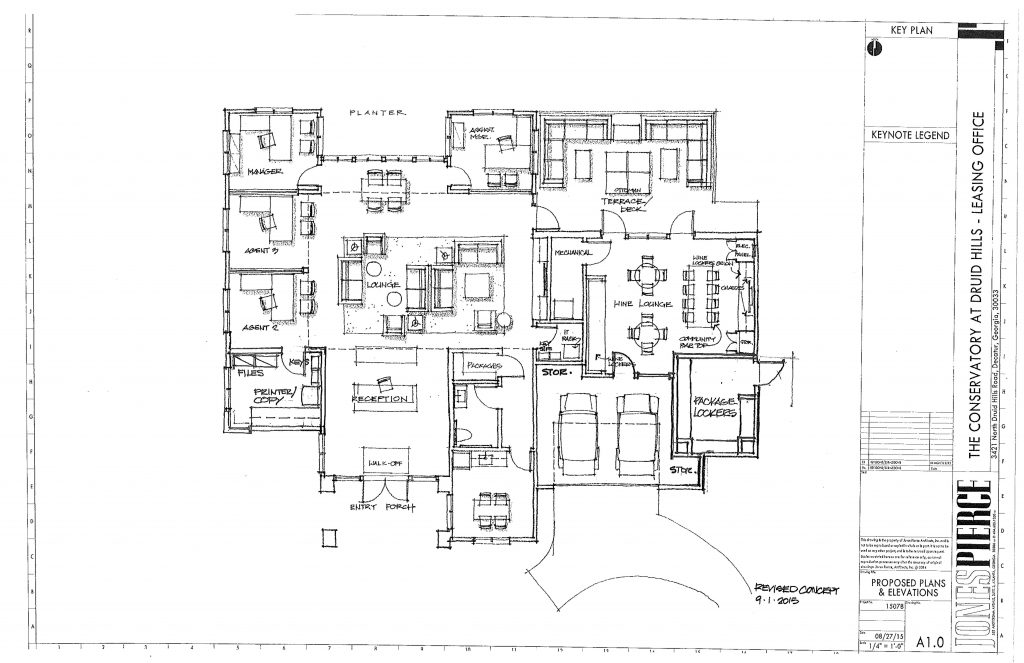 The flat roofs and large window openings led to a total rebranding.