Here are some construction progress photos from the 11/23/2010 site visit to the Monastic Heritage Center at the Monastery of the Holy Spirit in Conyers, Georgia. Completion is expected to be around Easter.

View of the complex from the entry road.

The parking lot for the Heritage Center is underway. 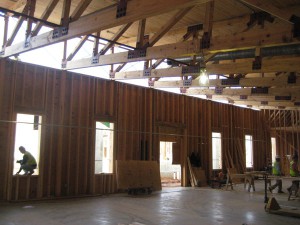 View from inside the Abbey Store.

A 6′-0″ tall clerestory of windows will span the entire north facade between trusses to maximize natural light into the store. Exterior Wall framing is almost complete. 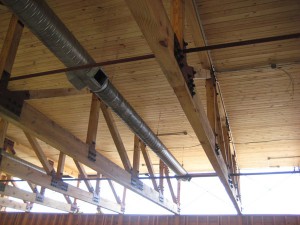 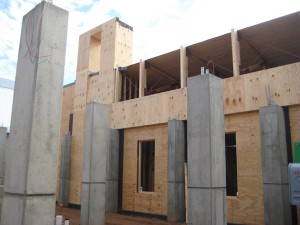 Exterior of the Abbey Store with cloister columns in the foreground.

The wood framing of the roof of the cloister should begin in the next few weeks. 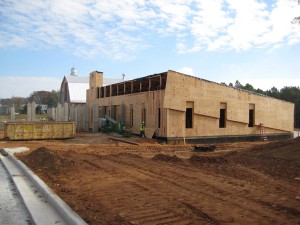 Western facade of the Abbey Store with the northern clerestory also in view.

This facade features a modern interpretation of the gambrel barn roof forms where the metal roofing wraps down on the facade to form part of the wall. Note the “big barn” in the background.

The concrete columns form a cloister connecting all 4 buildings which will enclose a central green space. 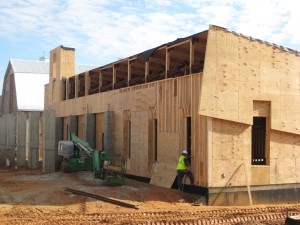 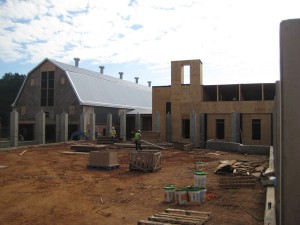 Big Barn and Abbey Store from the Central Green.

The new slab has been poured at the low point original sloping barn slab exposing portions of the rubble foundation that we will leave exposed. Stucco will cover the lower wood framed walls to lighten up the space.

Detail of the Abbey Store windows.

The thickened wall will give the building a heavy masonry feeling once stuccoed. Some of the cloister columns shown will be integrated into the wall. 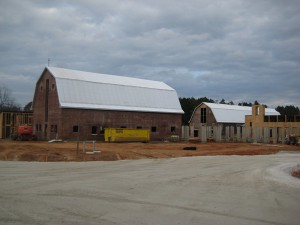 View of the complex from the road. 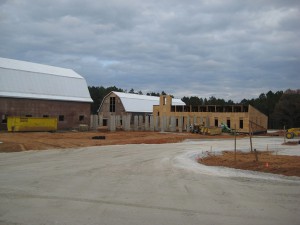 Another view of the complex from the road.

Check out the next update: